Stray Kids’ Hyunjin will be sitting out some parts of their ongoing second world tour INSANE due to his recent injury. 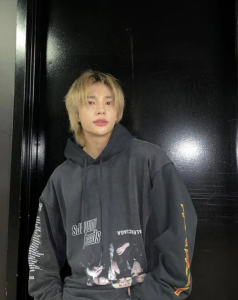 JYP Entertainment recently announced that Stray Kids’ Hyunjin had suffered a hand injury prior to their concert show in Oakland, California.

“Shortly before the Oakland show on July 12, Hyunjin bumped his right hand against a door and sustained a minor injury,” the agency said.

According to the agency, Hyunjin attended the Oakland show after receiving first aid from the on-site medical team that day. A day later, he received a thorough medical examination.

Although the injury is minor, the doctor advised that the idol should focus on treatment and avoid strenuous movements.

“Therefore, we inform you that Hyunjin’s performances for the remaining tour days may be partially limited. We apologize for causing concern among STAYs (fandom name) who have been waiting for Hyunjin’s performances. We will do everything we can to support his rapid recovery. Thank you, “the agency added.