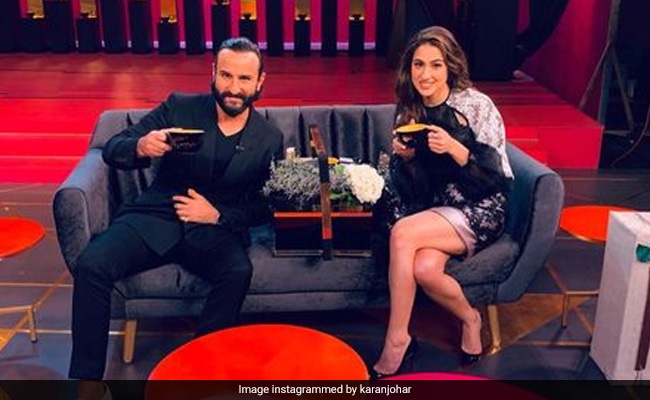 The new and freshly brewed episode of Karan Johar’s much-loved talk show Coffee with Karan fell on Disney + Hotstar Thursday. Guests? Janhvi Kapoor and Sara Ali Khan were at the famous “Koffee sofa”, where celebrities come up with shocking revelations and spill prayers about their love life. While Sara and Janhvi, who now share a good bond, kept the audience entertained with anecdotes about their travels, their exes and their latest crush Vijay Deverakonda (more on this later), they also shared what their respective families think about their professional projects.

Sara Ali Khan, who is the daughter of Saif Ali Khan with her ex-wife Amrita Singh, revealed that Saif “likes” her film as long as they are not the remake of his film. When Karan asked Sara if he “does not like your movie yet”, she replied: “As long as I do not make his movie again, he likes my movies. I think we are good there” and burst out laughing. furthermore, Sara has only appeared in one film, which is a sequel / remake of her father’s film, Sara Ali Khan, who made her Coffee with Karan debut with her father in November 2018, also revealed that the one who makes all the major decisions in the house is her mother Amrita Singh and that she has never felt the absence of Saif Ali Khan in her life after the separation as he always is. “just a call away.”

Sara Ali Khan made her Bollywood debut Kedarnath in 2018. That same year, her film with Ranveer Singh won the title Simmba was released in theaters and it was a hit. Her third film was a sequel to Imtiaz Ali’s director from 2009 Love Aaj Kal, starring Saif Ali Khan and Deepika Padukone. Next, she was paired with Varun Dhawan in Coolie No. 1.

Sara’s last movie was Atrangi Re along with Akshay Kumar and South Star Dhanush.