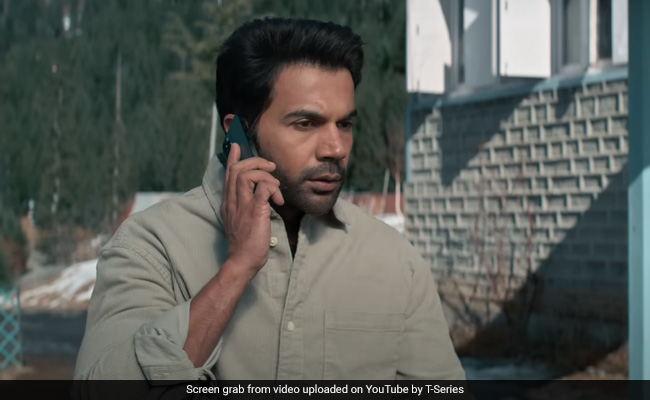 Rajkummar Rao in a still from HIT. (courtesy: YouTube)

Evaluation: Two stars (out of 5)

With the exception of a fresh set of actors, a new location and a smaller and constructed climatic tweak, HIT: The first casea hindi remake of the 2020 Telugu thriller of the same name, is a dull, completely meaningless replication of a whodunit that quickly turns into a whydunit.

Writer-director Sailesh Kolanus’ film chooses the same character names and even identical camera angles in many a crucial scene for this tired retelling. It’s hard to understand why he had to take another shot at the first case after it was duly executed and dusted off with some degree of success.

Those who have seen the original film with the title of Vishwak Sen – it was released almost two and a half years ago, weeks before the nationwide shutdown brought theatrical exhibition activity to a standstill – when they saw this inexplicable repetition with Rajkummar Rao in lead would be a total waste of time.

HIT: The first case is about a PTSD-stricken, pyro-phobic investigator, Vikram (Rajkummar Rao), whose career with the Homicide Intervention Team (HIT) is in danger of being derailed due to a trauma from the past that haunts him and gets in the way of his work in the field

His analytical acumen is as sharp as ever, but the sight of a violent death and mutilated corpse disturbs the man. His rogue advises Vikram to leave the police force and look for a less stressful job. He initially rejects the proposal.

Even when he struggles with his fragile mental state – he eventually chooses three months’ leave on the psychiatrist’s suggestion – he is sucked into two missing cases at two-month intervals. Both victims are women. One of them is university student Preeti, the other forensic pathologist and Vikram’s girlfriend Neha (Sanya Malhotra).

The story has moved from Hyderabad and Telangana to Jaipur and Rajasthan, which of course makes the visual topography markedly different. Yet, HIT: The first case improperly manipulates the palette to make everything look crushingly old and strenuous. A highway, a toll gate, a police station on the outskirts of the city and the HIT headquarters have the same look as they did in the Telugu movie.

Fully HIT: The first case, one can therefore not help but wonder why the director wants to make the same film twice in the course of two years when he has no apparent intentions of breaking fresh ground. The lines that the characters shout are translated into Hindi (and a bit of the local dialect) with Slavic accuracy, and the situations begin and end as they did the first time.

Even if you do not know what the Telugu-language police procedure was about, you would still find it difficult to warm up to something that the Hindi version offers. Two women have disappeared, and almost everyone (including the troubled Vikram) who has had anything to do with one of the unrelated duos is a suspect.

The film moves back and forth using an elimination method to lock in about the culprit, though there is no way to know if the two crimes have been committed by the same person or two different people.

The audience is supposed to believe that Our Man Vikram is an incomparable scout, and nothing ever escapes his attention. But when it comes to pushing, he seems to grope in the dark and fall for false clues all too often for his reputation to be taken at face value.

The homicide investigation outfit, of which Vikram is a part, has a member he can not see eye to eye with – a fact that makes it the already muddy pitch of a man who still has his own gnawing demons to deal with. While the difficult colleague spells trouble in many ways, but Vikram stands firm despite the personal challenges.

Suspended police inspector Ibrahim (Milind Gunaji), the first man at the scene from which the first girl disappeared, and HIT chief Ajit Singh Shekhawat (Dalip Tahil), who usually has Vikram’s back, show up at various points in the investigation as Vikram makes an effort to to get to the bottom of the truth with the help of a junior who happily carries most of the workload to ease things for his anxious boss.

A woman named Swapna (Shilpa Shukla), who makes a big deal out of being a divorcee and worries about the way society treats a woman living alone, shows up on Vikram’s radar. She sets in motion a particularly interconnected phase of the investigation, in which polygraph and drug tests create more problems than they solve for the head of the investigation.

HIT: The first case will never be the tight, exciting, suspenseful police drama that it desperately wants to be. Aside from the routine unveiling, the final unveiling is terribly stupid, a forced twist that is the only deviation that this film makes from the original. It is only a small detail that has been modified to turn a banal case of envy (in the original film) into a vigilant affair and heartache, but the individuals – and the victims – at the center of the grand final revelation hold no surprises.

On the acting front, Rajkummar Rao strives hard to overcome the contradictions that plague the protagonist. Sanya Malhotra is lined with a walk-on part that has little potential. The others in the cast play types rather than rounded characters.

HIT: The first case would have been much better off being a dubbed version of the Telugu movie in this era of pan-Indian releases. The independent successor to the original, HIT: The other caseto be released on the last Friday of this month.

This ends with the announcement of a successor. A Hindi language HIT: The other case on the way. Based on the evidence available so far, it is more of a warning than a promise.