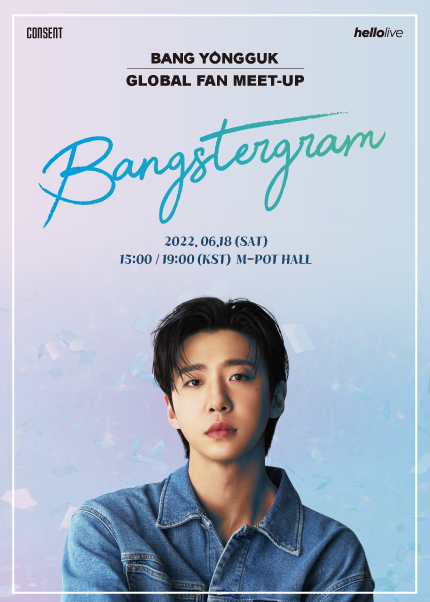 The event with the title Bang Yongguk Global Fan Meet-Up: Bangstergram, organized by Hello Live, is a ticketing event. We at Kcrush are giving away two tickets to two lucky fans for this event!

To participate, we ask for donations to NAMI (National Alliance on Mental Illness) via K-pop social evenings fundraiser on NAMI’s website. Even a donation as small as $ 1 will get you into the competition. Once you have made a donation, take a screenshot of your donation (do not provide any personal information!) And send us a message on Facebook to let us know. That is it! We will notify the winners on Friday 17 June at 15.00 CST.

Each ticket will be purchased under the name and email of the giveaway winner and we will send you the login information. The winning tickets will does not include the video call.

Good luck to everyone who comes in!

After setting the world on fire with their megahits like “Butter”, “Fire”, “Boy in Luv” and “Fake Love” among other tracks, BTS announced that they will be taking a group break to focus on solo projects. Tuesday, June 14 … Read more

– MCND’s 4th mini album pre-released song, “WAT1” teaser! A powerful performance that catches your eyes and ears + melody – Continuing with the American tour in August, all seats in Europe are sold out! 9 … Read more

As the excitement of her incredible, emotional 20-year anniversary concert the day before continued, BoA released her 20th anniversary album ‘The Greatest’ on May 30 – just as she entered the 21st year since her debut in Japan. The … Read more

The Japanese male-woman-dance-pop group lol recently released their new single, ‘Baby tonight’. This love song was written by group member Yusuke Sato, while his bandmate honoka was inspired by the lyrics to write the rap section. ‘Baby … Read more

This summer, BROOKLYN will hit the airwaves on its ‘I’M GONNA LOVE YOU TOUR’, which will perform in cities across the United States and Europe. BROOKLYN REVEALS US DATES FOR SUMMER 2022 TOUR BROOKLYN will perform live in Houston, … Read more

The next generation of Japanese girl group FAKY released the new single ‘Diamond Glitter’ on May 25th. This is the main track from their upcoming first full-length album, which is set to be released on Wednesday, October 19th. The new digital …. Read more

TRiDENT is formed by three members who have been called “the next generation of a classic girl rock band”. They will digitally distribute their new song called “Spoopy”! This song is included in their 1st mini album “DX”, … Read more

Told in a light but appealing dark voice and a concise but rich sound, his story draws attention to ‘love’ and ‘survival’. The mini-album, which consists of a total of 4 songs, contains the album and the new song … Read more

2022 turns out to be the year of K celebrity wedding when another singer announced her upcoming wedding! On May 11, 2022, Davichi’s Lee Hae Ri shared a handwritten letter on Instagram announcing her upcoming wedding. Her agency, WAKEONE, … Read more